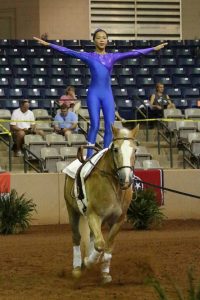 Founded in 1989, the Falconwood Vaulting Team is one of the oldest on the East Coast and the only team registered with the American Vaulting Association (AVA) in the state of Georgia.  While many athletes choose to participate recreationally, the Falconwood Vaulters have a long history of competing (and medaling) both regionally and nationally.  Additionally, vaulters from Falconwood have earned places on both the 1996 Olympic demonstration team as well as the 2010 World Equestrian Games demo team.  Our team practices twice a week and attends several regional competitions each year as a team.

The Falconwood Vaulters proudly host an annual USEF/AVA recognized competition every Spring, as well as several fundraisers throughout the year, including the popular 5K Trail Trot.  Please visit the Falconwood Vaulters website for more information on how to join, private lessons, and upcoming events:

What Is Equestrian Vaulting?


We’re on the cover of AVA’s Equestrian Vaulting Magazine!

Our beloved horse, Scottie, and one of our vaulters made the cover of Equestrian Vaulting Magazine!